In the last article, I talk about an ssd vs hdd comparison which you can be found here. In this article, I will spend sometime to learn into samsung ssd 850. Samsung ssd 850 pro is a solid state drive. At this moment, this drive produced a staggering of IOPS 100,000 read IOPS and 90,000 write IOPS[19] . Support sata interface of 6gigabits per seconds.

Additional characteristics of this model. 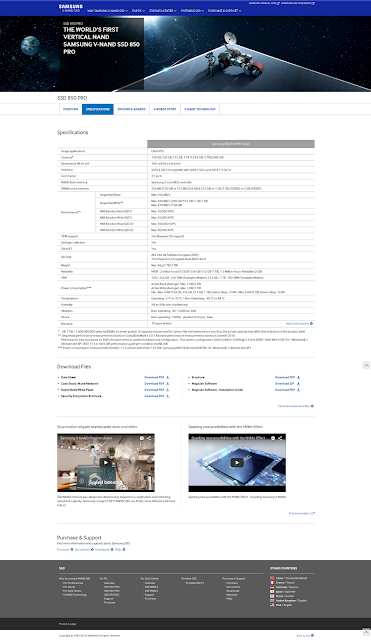 With this blazing speed, as for me as a software engineer, I really think the speed help me in term of application launching like eclipse and especially code grepping or file finding. But I think this speed is definitely a ideal match for software like cassandra and elasticsearch where disk I/O speed is much sought after. With the number show above and with my previously hdparm comparison, I think it will give very much difference if switch from normal hdd spinning disk to this ssd.

Full support for TRIM, garbage collection, and SMART technology are guaranteed. With a staggering reliability of 2 million hours mean time between failures and 150Terabytes written and TEN YEARS warranty period, I must say I am impressed and convinced. The power consumption is also very low. During active read/write, maximum of 3.5W and 3.0W respectively. If you are using this for laptop which power is always a matter of concern, ssd is a wise decision.

With 24 awards under the belt for this model, I think for the skeptical section of people, it is safe to really start to use ssd. If you have a budget, I think rather than just up the cpu and ram, a switch from hdd to ssd should give very much difference too.

I leave this article with samsung 850 pro ssd videos